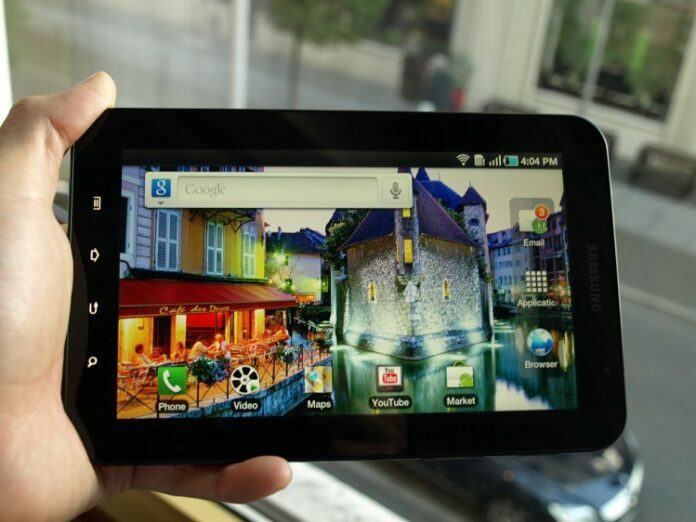 While the phone industry has been one of the fastest growing in the last years, another type of devices are starting to make a name for themselves. Combining the portability of the phones with the speed and power of PCs, tablets seem to be the future battlefield in terms of technological evolution. Yet, besides the hardware specifications, any device needs an operating system and it’s not that big of a guess that Google’s Android has taken a quick launch in this domain as well. Combining all these elements, Samsung decided to introduce their first tablet, which running on Android will try and fight off other similar products from LG, Acer, Dell, Cisco’s Cius tablet and even the world renowned iPad (which is now available on sale worldwide).

As regards the technical specifications of the new Samsung tablet, not many details have been made public. Still, we should expect a 7″ Super AMOLED screen and 16 GB of internal storage space, which can be later on accompanied by the supported MicroSDHC supported cards. All these will be commanded by a 1.2GHz Hummingbird processor, one of the newer generations on the market. One other important fact when talking about tablets is the autonomy of the battery, which in this case should be guaranteed by the 4000 mHA battery. The software version has not been made official yet, but as most of the Android powered devices are being upgraded to 2.2, we should expect at least this version to be implemented on the tablet.

As we can see in the provided picture, the design of the new tablet is very similar to the one of the Samsung Galaxy S. Yet, it looks a bit slicker and more stylish, following the trend of the other already existing tablets. Other similarities between the two include the same family of processors (Hummingbird) and the interface, which baring some small changes, will be the same.

The exact release date has not been announced yet, but it should come out in the 3rd quarter of this year. Considering that other similar products are already out for sale, it looks a little bit late for Samsung to launch their first of a kind, but let’s hope that the wait will be worth it.