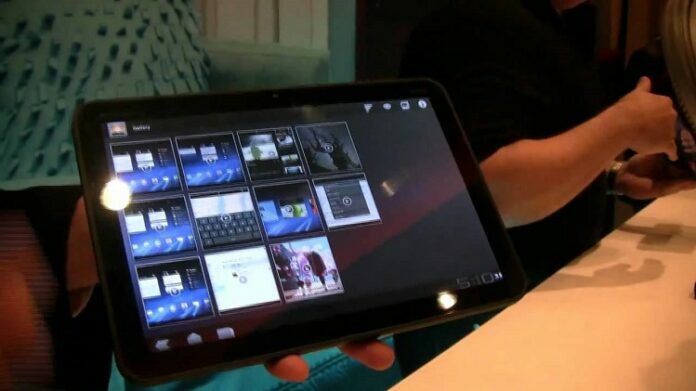 Just like we were expecting, the Consumer Electronics Show 2011 from Las Vegas was a real feast of tablets, reports indicating that the event had close to 100 different tablets showcased. The star of the event turned out to be the upcoming first Android 3.0 Honeycomb tablet, the Motorola Xoom.

Motorola Xoom made its first official appearance over a month ago at the D: Dive Into Mobile conference in San Francisco, where Android head Andy Rubin unwrapped a prototype tablet to demo the upcoming Android Honeycomb OS. Rubin stated that the device wasn’t “due out for a while” and revealed only that the device was a tablet computer that Google was working on with Motorola. Motorola Xoom proved to be the highlight of CES 2011 also, probably due to the fact that this tablet is going to be the pioneer for the upcoming tablet optimized Android 3.0 platform. The device didn’t disappoint with its specs either, promising to be the next true competitor for Apple’s iPad.

First of all, Motorola Xoom brings an even wider display than iPad’s 9.7 inch screen, measuring no less than 10.1 inches with a resolution of 1280 x 800 pixels. The tablet will also be the first among its kind to bear a dual-core processor, Nvidia’s Tegra 2, clocked at 2 GHz and backed up by 1 GB of internal memory. There will be a 2-megalixel front-facing camera and a 5-megapixel rear-facing camera capable of capturing 720p HD videos. The device is also offering 1080p HD video support and, of course, Adobe Flash Player support couldn’t be missing as well. Motorola Xoom owns an HDMI output and it is said to have a “console-like gaming performance”. It has mobile hotspot capability for up to five Wi-Fi enabled devices, buit-in gyroscope, barometer, e-compass, accelerometer, adaptive lighting and version 5.0 of Google Maps with 3D interaction.

The Motorola Xoom tablet PC comes will a whole bunch of accessories as well. The Motorola Wireless Keyboard is a full-sized keyboard with a super thin design which will allow the end user quick access to Android apps with shortcut keys. The Portfolio Case will protect the tablet when on-the-go using both the durable and leather versions. Motorola Xoom’s Standard Dock helps the users handle their tablet at a convenient angle while it charges.

There is no official release date yet available for the Motorola Xoom tablet PC, but rumors place Verizon’s launch date around May. The tablet will initially launch as a 3G device, but later on it will become upgradeable to support Verizon’s 4G LTE network. The Wi-Fi-only version on the other hand, has been confirmed by Maurizio Angelone in an interview which revealed an April 2011 release date. Lately, more rumors emerged placing the Motorola Xoom release date on February 17.

No official info was shared regarding the price, but one unconfirmed leak sets the Motorola Xoom price at $699.