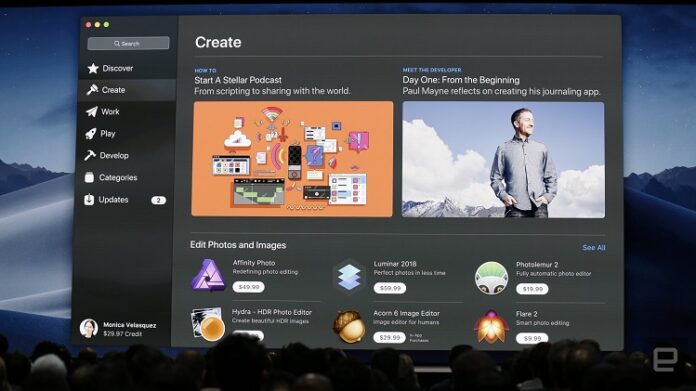 After years and years of iOS App Store, January 6th was the day for a new similar, but more sophisticated store from Apple to launch: the Mac App Store. It was indeed time for something new in the Stores section, after the update received by iTunes in December. This newest “place to shop” for Mac users brings along tons of apps that can be downloaded, using the same iTunes account as before and then installed by following the usual easy steps. In order for fans to gain access to the Mac App Store, they first have to upgrade their OS to Mac OS X v 10.6.6, through the available Software update tool.

The new Store has been presented with big fuss in Cupertino, California, by no one else than Steve Jobs himself. In his brief, but convincing speech, he stressed that the store already features more than 1000 apps and will be growing fast, in order to satisfy everyone’s demands. These applications are divided in categories, such as Entertainment, Games, Lifestyle and others and can be browsed through in a similar way with the iOS App Store, either by manually switching the categories, using favorites, or by entering keywords in the available search bar.

The prices of the apps vary quite much, depending on which tool one wants to buy. For example Boinx. iPhoto®, iMovie® and GarageBand® apps all cost $14.99, while more advanced and professional oriented ones, such as Apple’s most powerful photo manager and editor – Aperture 3 – will make fans take $79.99 out of their pockets.. or better said – out of their accounts. At a first glance, apps are indeed a bit more expensive than the ones in the iOS store and yes, Apple still uses the .99 cents scheme for each and every product, making it feel more like a .exe or .jpg extension than a price tag by now.

One of the $14.99 apps is called Ancestry.com Family Tree Maker and is meant to help people trace back their families a lot easier and by having more fun than before. Of course, photo managing apps will play an important role in the development of the Store, as history shows that people love these kind of programs; question is how many will want to pay for an application when similar ones are available for free, or at least demo versions of the same products.

To ensure that users who are already accustomed to the iOS Store don’t have any problems in adapting to the new platform, Apple have maintained the same universal installation process, one-click-buy features and notifications regarding new updates for purchased products. As regards the number of application in the Store, there’s little doubt that it will grow significantly over the next few months, as developers love to take advantage of every new possibility to show off their programs. It’s really just of questions of who’s able to make the necessary little changes and protocols first, in order to reach the top chart early on, as we know how important that is and how difficult it can be to get there later on.