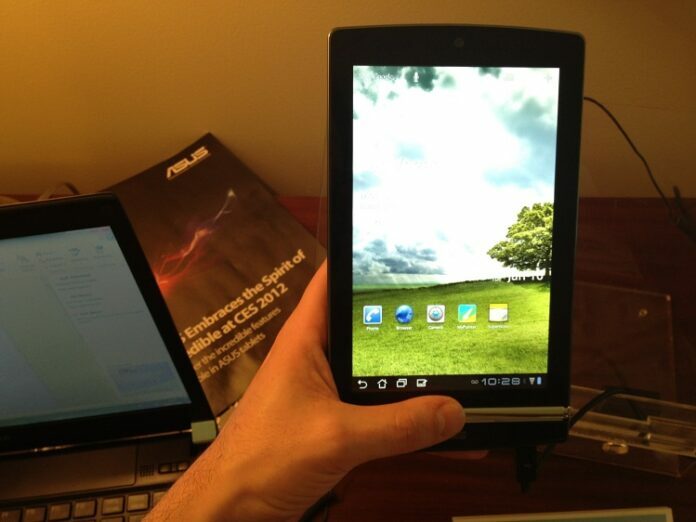 The intense shopping season is gone and a new year has come instead, bringing along lots of fresh gadgets that can fit anyone’s needs. While some manufacturers are focusing on the smart-phone market, such as Motorola with the Droid Bionic and others are planning new tab releases (for example the Playbook), Asus has come out with a really promising concept. Their newest ideas have been translated in what we now know as the Asus Eee Pad MeMo, a gadget in-between smart-phones and tabs. It should be an interesting ride this one, as it’s kind of unique and can’t be included in a market segment just yet.

At CES 2011, Asus released several pieces of information regarding the Eee Pad MeMo. Although the main concept can be viewed as outdated, the Eee looks terrifyingly cool, new and stylish. It has a 7 inch display that can put up resolutions up to 1024×600 and comes along with two cameras. The front facing 1.2 MP camera should be enough for video calls, while the rear 5 MP one is meant to satisfy fans’ needs in terms of high quality pictures and movies. Under the case, one will find a dual core 1.2 GHz Qualcomm 8260 processor. In order to allow users to enjoy the device as long as possible without having to constantly recharge, it has been fitted with a 4400 mAh battery, which should ensure up to 8 hours of movie playing. The Eee Pad has also been equipped with an HDMI output, to allow owners more freedom in terms of connectivity. Following the current Android trend, Asus have gone for Android as the OS; Furthermore, Honeycomb should be out by then and probably that’s what the company is thinking about when announcing the Pad will be running the future version of Android.ASUS Eee Pad MeMo Announced For June. Looks Cool.

Besides the impressive hardware features, the main attraction point of the upcoming Asus device can be considered the capacitive stylus that will allow interesting applications to be run on the MeMo. Amongst these apps, Media Note (an interesting note taking method) and Painter (small toy for big children) are preinstalled and several others will soon be put together. The screen seems to be both capacitive and pressure sensitive, so the stylus probably won’t be the only input method. Leaving the cool stuff aside for a sec, you might wonder how one should be able to place calls with such a device, as it would obviously be strange to take a 7 inch MeMo Pad to the ear. The solution is straight forward – the supported standard Bluetooth headset. In addition to that, the Asus Pad will come with its own custom handset that should provide for a good solution to use the MeMo as a smart-phone on either of the possible CDMA and GSM networks. The first models will probably come out with HSPA+, shortly followed by CDMA/LTE versions.

Regarding the release date of the Eee Pad MeMo, Asus has announced that it will be available once summer arrives – in June. It’s a long time until then and the device might see some changes, hopefully towards the best. For example, the expected price is $499, which to be honest is kind of a lot for what the gadget provides. Of course, coolness doesn’t come in cheap and the iPad is one of the best tabs to prove that, but we doubt that the Pad MeMo will come anywhere close to the success of the Apple releases. Any case scenario, it’s an interesting product that should bring some diversity on the smart-phones and tabs invaded market.