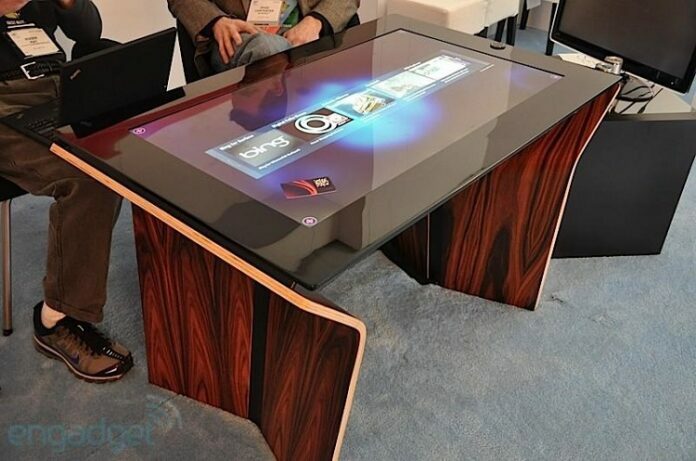 Beside all those smartphones and tablets which will rock the market this year, CES 2011 also featured a new version of Microsoft’s surface computing platform, namely MS Surface 2.0. Although the initial release of the platform took place some three years ago, the public was left out of the Surface experience (a commercial unit only costs $ 12500, while Surface for developers costs a lavish $15000!). It seems Microsoft will lower the price on this new generation of Surface, but don’t expect anything radical.

Anyway, for the new Surface, Microsoft teamed up with Samsung for the SUR40 with Microsoft Surface, or ”the 2.0 Experience”, as they called it. The exterior has been revamped, as it now features various pedestals so that you can mount the platform to, let’s say, a wall. In terms of specs, the SUR40 boasts a 2.9 GHz AMD Athlon II X2 processor with Radeon HD 6700M and a 40-inch, 1080p screen with a 1920×1080 resolution. The interface looks better and the two companies added, not surprisingly at all, Windows Phone 7 support. The next generation of Surface features infrared ”pixel sense” detection in each and every pixel, so the entire screen is at your command. The first Surface only had specific points of touch. Some wacky things you can do are scanning the contents of a piece of paper you put on top of the screen. Microsoft presented a bank app that allows users to swipe a mailer up against the screen which detects and reads it.