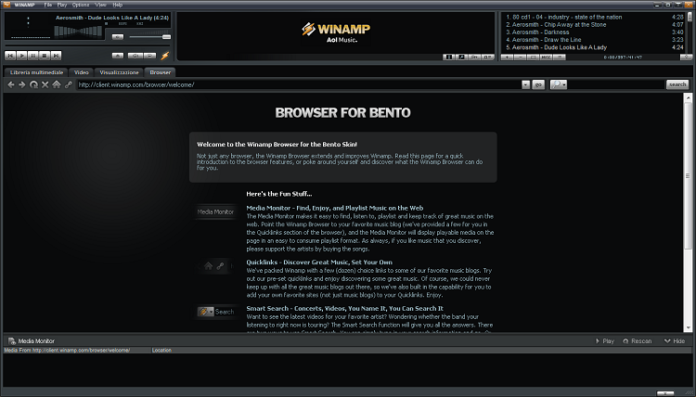 Hello there, music lovers! Good news! Winamp has just announced the newest desktop version of what is probably the most renown music management software in the world. Yup, Winamp has reached version 5.6!

And that isn’t all! With the help of the new Winamp for Android beta (works with Android 2.1 and above), you can pair your desktop Winamp and obtain a ”complete end-to-end music management solution for your desktop and Android device.”, according to the not-so-modest Nullsoft team.

The main feature brought by Winamp 5.6 is a new device management interface which support wireless syncing of media, an easy management when it comes to multiple connected devices, as well as faster encoding and transferring of media to your devices via USB or WiFi. You can now stream media from a connected devices without having to transfer media to the local library. Note that wireless device syncing and streaming are only available if you have Winamp for Android installed.

Let’s see what you can do with the Winamp for Android beta (0.9.2). That is, beside wireless syncing with your desktop. SHOUTcast Radio enhances your listening experience- you can search, favorite and play over 40.000 internet radio stations. Apart from the standard widget, a new, smaller one (4×1) is now available. You can also add your favorite playlists to your Android home screen and activate playback control from the lock-screen.

The intuitive interface offers permanent player controls. They’re always available. You can now manage your Winamp for Android play queue, which lists the track you are now playing, the next one, and so on. You can change the order of the tracks in your queue, and save it as a playlist, if you like it.

If you have the Last.fm app installed on your Android smartphone, you’ll be able to perform scrobbling and to capture all of your mobie listening history in real time. Don’t forget to try the Google Chrome extension for Last.fm.

Winamp for Android Beta (0.9.2) supports various languages- English, French, German, Brazilian Portuguese, Japanese, Russian, Polish and Romanian. It seems there will be more in the future. The first version of the Beta for Android was released in October, and you could sync with Winamp 5.5.9.
If you want to download the new Winamp 5.6, download Winamp for Android Beta, or simply want more info, visit the Winamp Blog.

PS: It seems that Nullsoft has received a few complaints about Winamp for Android Beta 0.9.2, such as crash reports for the Samsung Galaxy Tab and the Dell Streak. The version you’ll find on their site is an updated one, and these problems, along with some other issues have all been solved.