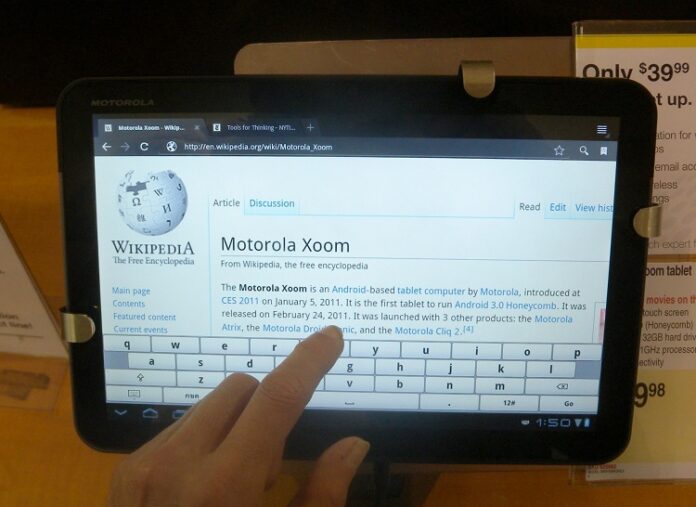 Last week, prior to the release of the Motorola XOOM in the USA, Best Buy put its pre-order page back up for everyone interested. Those who did pre-order were able to get their device on the 24th, although it did cost them a hefty $799.99 without subsidy, and not including any accessories. Reviewers were adamant that the device is well-worth the price tag, and we’re sure we’ll soon hear from all the early converts whether it really is. For our friends in the UK, the WiFi only Motorola XOOM will be available from three retailers – Best Buy, Carphone Warehouse, and Dixon’s. While there’s no Motorola Xoom WiFi price that comes with this announcement, Motorola at least assured a release date of Q2 2011, or June of this year at the latest.

The Motorola XOOM made a big impact from the moment of its announcement as it is the first device to commercially come out with the Google Android 3.0 Honeycomb operating system. The Honeycomb is Google’s unofficial OS for tablets, and reviewers rave about how efficient and fast it is. In the USA, the XOOM is only available through Verizon, with plans for an AT&T release later on for the telco’s LTE network. Prior to its release, the Motorola XOOM raised eyebrows when Motorola CEO Sanjay Jha confirmed the $799.99 price point. Kevin Krause of phandroid compared the XOOM’s price to the Samsung Galaxy Tab’s high price point, although pointed out that the latter “was an overall flawed tablet experience to begin with.” The WiFi only version was sold for $600 upfront, price competitively with the Apple iPad.

On the press release for the WiFi-only Motorola XOOM’s launch in the UK, Graham Stapleton of Carphone Warehouse and Best Buy called 2011 the “year of the tablet.” Indeed, with all the new tablets devices introduced during this year’s Consumer Electronics Show and Mobile World Congress as well the as the introduction of Google Android 3.0 Honeycomb, that seems to be the case exactly. It will be interesting to see what more devices will be introduced, and how far manufacturers can take the technology within the next few months.