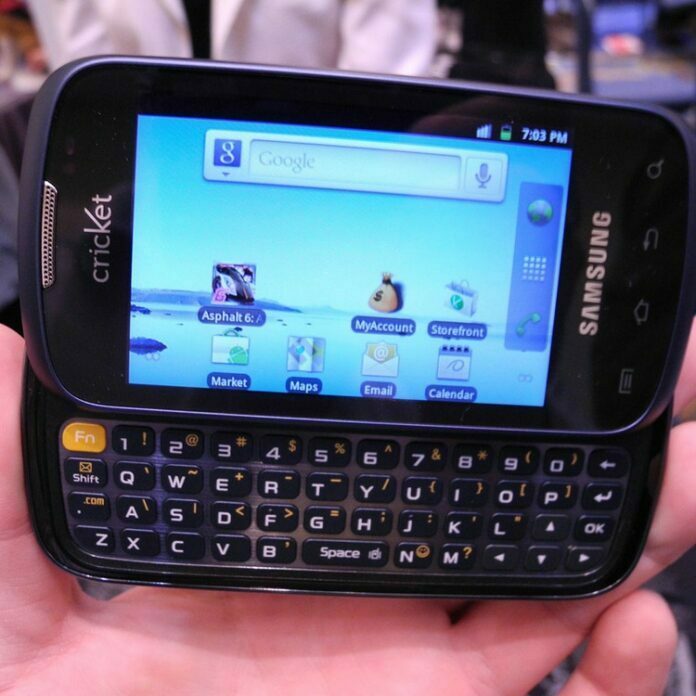 This time, at the CTIA 2011 press event, we came across some interesting announcements about the Samsung Galaxy Indulge ! This is the same phone that debuted with Metro PCS earlier this year, now all set to come to Cricket Wireless. Like the earlier MetroPCS version, the new Indulge handset will also have digital storefronts, account management apps, and a handful of other preloaded applications to offer to its users. However, the Cricket Wireless Galaxy Indulge will be a bit different compared to the version that went to Metro PCS in terms of performance, types of bundled apps, and price. For those of you who haven’t yet come across this beautiful model, Samsung Galaxy Indulge is an Android smartphone that uses Samsung’s unique Touch Wiz interface and features an Android 2.2 Froyo OS, a 1GHz Hummingbird processor, a full slide-out QWERTY keyboard, a 3.2 mp camera, and a 3.5” capacitive HVGA touch screen with a resolution of 320 x 480 pixels.

Although no official statements have been made on the price and release of the new handset till now, Cricket Wireless did hint on an anticipated release of the device in May/June this year. You may expect the Samsung galaxy Indulge price to be somewhere around $300-$350. Now I know that’s steep, but if you decide to go off-contract, this is the little trade off you have to make as the prepaid carrier doesn’t heavily subsidize the phone’s cost. Let me remind you that Metro PCS Indulge was sold with a price tag of $399 off-contract. The data plans that were offered with it included $50/month for 1GB data and $60/month for unlimited data. So, that means Cricket can be expected to offer a similar handset with improved performance and apps at a much better price.

As far as the Cricket Indulge specs are concerned, I found them to be more or less similar to those of the MetroPCS Samsung Galaxy Indulge, the only difference being in the apps that come pre-loaded with the device. Here is a brief list of its specifications for your reference –

The biggest disadvantage in the MetroPCS Galaxy Indulge was that the device wasn’t able to handle the data-heavy applications, like browsing websites, downloading apps, and videos when away from the carrier’s 4G network. This is mainly due to the fact that MetroPCS didn’t really have reliable 3G network speeds. Now that Samsung’s Galaxy Indulge has found a new home for itself, we sincerely hope the problem faced earlier with MetroPCS version won’t go through to the Cricket Wireless version. Other disadvantages of the earlier version included its weak battery life and absence of camera flash. Although we are not sure, we do hope to see a better battery performance and some better features in the Cricket Wireless version of Galaxy Indulge.