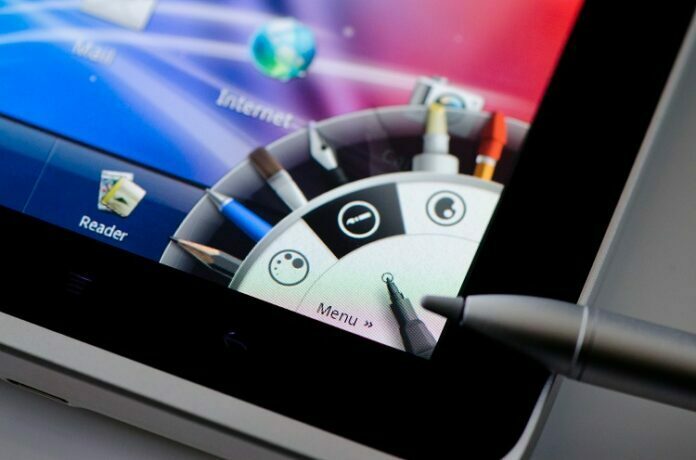 The HTC Scribe technology is something that should have caught your eye if you are following the latest developments from the tablet ecosystem. To be released on the HTC Flyer, the Scribe technology promises to set the Flyer apart from other Honeycomb tablets of 2011! All the fuzz is in the HTC Scibe pen.

Don’t confuse this ‘pen’ with a stylus. In his interview with ReadWriteWeb, Keith Nowak from HTC explained that, unlike a stylus that is nothing but a “dead stick” used for navigation, the HTC Flyer pen is just an optional accessory that can be used to scribble, draw, and write on the tablet. You won’t need the pen to navigate the device, but you can use the pressure-sensitive tip of the pen in apps such as “Notes” and “Sketchbook” to draw directly on the tablet. This is what HTC calls the “HTC Scribe Technology”.

HTC Scribe Technology Overview (To Be Released On The HTC Flyer)

The latest buzz about Scribe technology is that it will soon be opened up to the 3rd party developers. When that happens, we’ll surely get to see some more exciting pen-powered apps in the near future. However, we think that largely depends on the commercial success of the Flyer.

HTC Flyer is HTC’s first Android tablet that works with the pen, using the unique Scribe technology. When we first heard about this ‘pen’ feature of HTC, it seemed to us as if HTC was moving backwards in technology as we remember most of us putting our Palm Pilot to death long ago! Fortunately, as we explored it further, we realized that the technology is really unique and promises to allow lots of room for tablet-based drawings, writing and even art. Moreover, HTC is very positive about the future scope of this technology. According to them, the pen can be made more relevant for more than stock apps with a little more development in future. As the whole idea of using a pen within an in-built app opens up the interface of tablets to a large number of new possibilities, the HTC Scribe technology is definitely a step forward!

When Will the Scribe Technology Be Made Available to 3rd Party Developers?

Now that’s a difficult question to answer. As the HTC Flyer has not hit the markets yet, we can’t know when exactly third-part dev support can be expected for the HTC Scribe.

The Flyer is coming to Sprint as HTC Evo View with WiMax Connectivity. Its Wi-Fi only version is expected to arrive in the Best Buy Stores sometime during Q2 this year. So, you may expect Scribe to open up to 3rd party support at some point after the anticipated launch of the tablet.

For those of you tired of taking down notes on a spiral-bound notebook with an ink pen, the idea of using a pen to take digitized notes on a tablet sounds really appealing! HTC Flyer’s in-built Sketchbook app will allow the user to take notes and record the meeting simultaneously. You can then play back these recordings and the notes together to recall what was being said by whom at what time! Isn’t that amazing! The Scribe-based app also offers cloud-based backup by syncing with Evernote.

The app called “Notes” allows the users to insert pics from the gallery or directly from the camera and scribble text at same time. Sound good! But, what I didn’t understand till now is why two similar apps and not just one with all features?! That only HTC can answer, but it’s probably because they can’t come out with just one app for their Scribe. Or maybe the apps will have different features, who knows ?

All in all, HTC’s Scribe technology does seem to make a lot of sense to internet reporters, business suits and college, but the question that still remains is “how well the HTC Scribe works and how big an improvement it is over its analog counterpart (if any).

What’s your take on that??