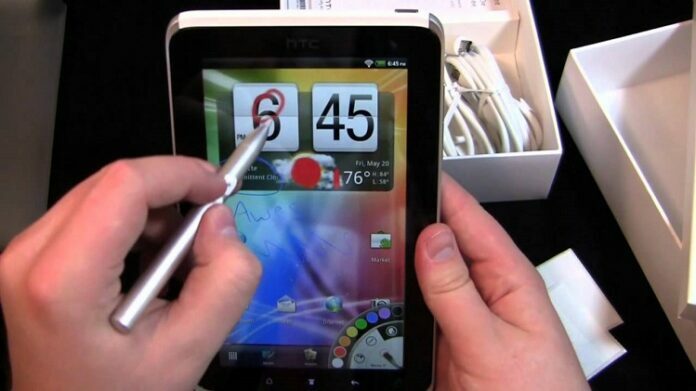 It seems like the new HTC tablet called the HTC Flyer will probably be officially announced at the Mobile World Congress 2011, held in February (14-17) in Barcelona. Norwegian site amobil.no claim to have received the leaked specs for the Android 2.3 table. We previously reported that one rumor placed the HTC Flyer release date for sometime in March. So, cutting to the chase, these are the rumored specs for the HTC Flyer:

• 7-inch, 1024×600 resolution screen,
• Qualcomm Snapdragon MSM8255 processor
• Android 2.3 (Gingerbread) at first, but it seems users will be able to upgrade to Honeycomb whenever it is available. There is a slight possibility that the slate will come with Honeycomb from the start.
• 5MP rear camera with LED flash and facial recognition
• 1.3MP front-facing camera for video chat. Skype included.
• A remodeled version of Sense
• HSPA connectivity (meaning download speeds of max. 14.4 Mbps, and upload speeds of up to 5.76 Mbps)
• HDMI port (MHL)
• DLNA-enabled for wireless movie/music streaming
• Modified Sense UI, which comes with ”a desktop feel”.

And that’s not all. According to the Norwegians’ source, HTC is also working on a 10-inch iPad competitor, which will support LTE and will be released in the second half of the year.

Well, then. The HTC Flyer is definitely a tablet which will have many of you drooling over. More details will surely arrive in February.

PS. The picture above is only a render, so we don’t know yet if the tablet will look anything like it.