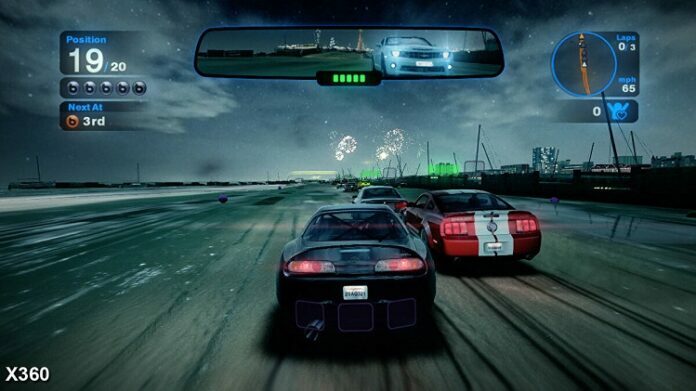 Blur, the upcoming racing video game developed by Bizarre Creations (of Project Gotham Racing fame) is steadily heading towards its release date: May 25th in North America and May 28th in Europe, and I must say that it looks like Bizarre or not, these guys seem to know what they are doing.

In Blur, considered by many a “Mario Kart meets Project Gotham Racing” kind of game, players will get to drive both licensed and fictional cars designed by the game’s producers. The driving in Blur is not just about getting the right corners, but also about picking up various power-ups that will help to secure that number one spot. There are 8 power-ups in total (of which you can stack up to three at any time), ranging from aggressive (Shunt – fires a ball of energy) to defensive ones (Shield). You will get to experiment with these 8 power-ups in Blur’s many (over 30) tracks inspired from the real world, during the classic “up and coming driver taking on the big shots” singleplayer campaign or in an online multiplayer mode that supports up to 20 drivers. Blur can also be played in split-screen with 3 of your friends but you won’t be able to play online and in split-screen at the same time.

Bizarre Creations and Activision have recently released some Blur tutorial videos that can get you up to speed with what the game is about. The first one shows all you need to know about Blur’s Career mode while the second vid shows you those 8 power-ups we talked about earlier. Watch them below, courtesy of IGN.

If you’d rather be taken through Blur’s basic gameplay by Danica Patrick (she plays one of Blur’s characters), check the below video.

If you pre-order Blur from Gamestop (PS3, Xbox 360) you will receive an exclusive Multiplayer Advantage Booster Kit which includes the Ford Branco in multiplayer and the Motor Mash game mode at Rank 1. You will also get “Double Fans” for the first five Moto Mash events, meaning you’ll receive more XP and get to unlock new content sooner.

Blur’s release date is May 25th/May 28th, depending on where you live. The game will be released for the PC, PS3 and Xbox 360. If you want to see what the critics think about Bizarre’s latest, check out Eurogamer’s Blur Hands-on.

Before you leave you should check out the latest Blur Gameplay Videos, courtesy of GameTrailers.