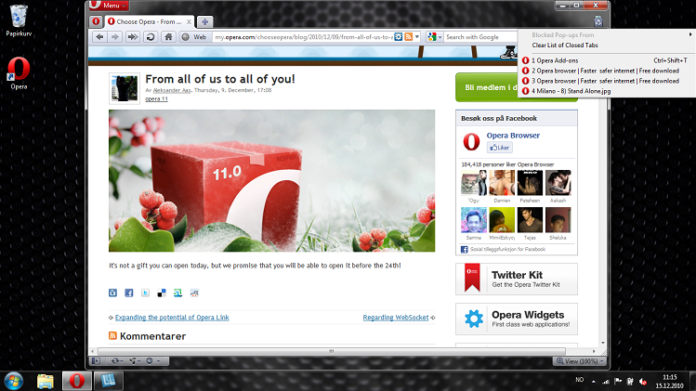 If you are an Opera user, you may have got confused by the two test versions of Opera released at the beginning of the month. Moreover, development snapshots from the Opera team were interchanging between Opera 10.70 and Opera 10.61 releases. Build numbers did not add up at a first look, and this added to users’ disorientation. The build numbers from Opera 10.70 were exceeded by some of those of Opera 10.61.

However, a recent post on the Opera blog tells about what really happened. It seems Opera is simultaneously developing two different versions of the renown web browser. While Opera 10.61 will focus on security ad will fix some bugs, its ’non-identical twin’, 10.70 will also add some new features to the security and bugfixes.

Now, about the build numbers again. Indeed, the 10.61 does have a higher build number than 10.70, but that’s because it was assigned by the build system. Remember that Opera 10.7 is the main development branch, while Opera 10.61 is basically a fix release. If you want to test the development snapshots, you can do it from here for 10.61 and from here for 10.70. Note that they are bound to have various bugs and to be unstable, as they are unfinished versions.

There are also a few improvements for SVG, enhancements to the JavaScript debugger, and they have added the option opera: config#VisitedLink|VisitedLinksState to control :visited (0 – disable :visited, 1 – match same domain only, 2 – enable :visited normally). In conclusion, with development snapshots (still with many flaws) released for both versions, the final version of Opera 10.61 is to be released soon, while that of Opera 10.70 will be released a little later.