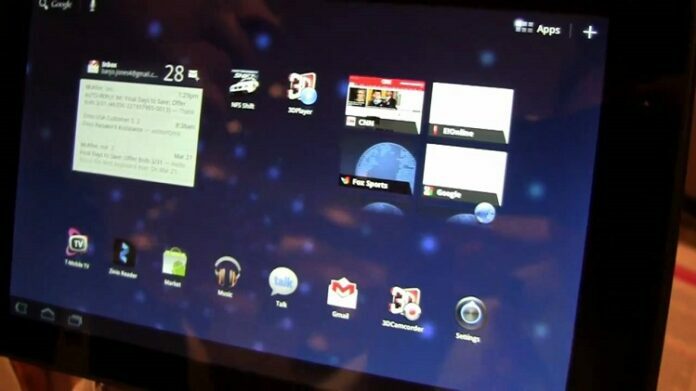 We’ve talked a bit about the upcoming G-Slate from T-Mobile and LG last week, but besides its appearance at CES, there wasn’t much to talk about, not even rumors. But two weeks is a lot when talking about gadgets and it seems the G-Slate is almost ready to for shipping. With the FCC having given its approval regarding the tab, it shouldn’t be long until the G-Slate is actually released. Submitting a device for FCC approval is usually done in the late stages of the pre-sale process. This only speculation, but the release date should fall sometime before the 1st of March. I’m guessing we’ll have some precise specs, a T-Mobile G-Slate release date and pricing, but until then let’s take a look at what we should expect from the G-Slate.

Just to make things clear, most of the following T-Mobile G-Slate Specs are unofficial and based on what one could see at CES. Amongst the few known facts about the G-Slate is that it will be running Android 3.0 Honeycomb, an OS especially designed by Google for tabs. The official press release stressed the importance of Honeycomb in the development of the tab itself, so there should be no compatibility issues. The tab will most likely be equipped with dual cameras, the main with dual zoom (capable of a max resolution of 2592 x 1944 pixels). The G-Slate will support most of the frequent networks, as well as the most common audio formats. As for the video ones, MP4, H.236 and H.264 video support is expected. The T-Mobile G-Slate will feature 32 GB of internal storage space.

We already know that the producers have designed the tab’s own Bluetooth hands-free, in the idea that it will be the main call placing option. For those wanting to use their own devices, the 3.5 mm Jack or the supported Bluetooth connectivity should suffice. T-Mobile swears the G-Slate won’t only be a reliable movie and audio player, but it should also allow users to interact with other people using the several social network apps preinstalled, as well as Instant Messaging, E-mail, MMS and SMS. For those worrying about the internet browsing speed, this shouldn’t be a problem with the efficient HTML and Flash browser, which also supports Java. In order to provide fans with the complete set of needed apps, the G-Slate will also be able to be used as a GPS or A-GPS device, probably based on a data plan.

T-Mobile’s G-Slate looks cool, sounds promising and is still a little mysterious. We’d say it has all the needed ingredients in order for LG to have a good start, once it will come out. If we add the features promised by the Android Honeycomb OS, the tab might make its way to the top of the Android tablet sale reports (although the Motorola Xoom will definitely be a tough competitor for the number one spot) . Still, this is LG’s first device of the kind and many buyers might feel a little unease in buying it. Of course, the price at which the G-Slate comes out will also play an important role in this equation, so we should just wait for the official figures before drawing a line.