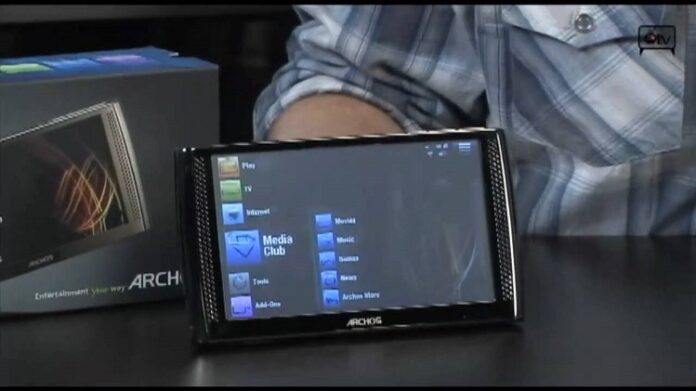 Aiming to provide a bridge between smartphones and laptops, the Android 1.5-based Archos 7 tablet is not meant to be an Apple iPad competitor. Instead, it relies on its low price and sleek design to bring in users that are attracted by the idea of a tablet, but don’t want to spend too much money on one. The Archos 7 release date is May 17 and is priced at $199.99 at Amazon.

At the first contact with this device, you will notice that despite the fact that the Archos 7 price is set for a cent under $200, the design is actually quite sleek. Although smaller than and slightly thinner (12 mm) than other tablets, the Archos 7 is big enough for you to enjoy watching movies and browsing the web via WiFi.

While the 7-inch touch screen capable of a 800*480 pixel resolution and provides a good image quality, it has the major flaw of not being that responsive (and as responsive as a brick when compared to the iPad). In addition, Android 1.5 is a rather outdated OS. The fact that you are not able to access the official Android marketplace (although you can install apps optimized for the Archos 7 tablet from the AppsLib Market) does not help much either.

The Archos 7 Tablet Has A Low Price And Decent Specs

Overall, if you want a low-cost tablet, the Archos 7 might be right for you, but don’t expect anything fancy. If you can live another 5-6 months before buying a tablet, I would suggest that you do so, as you’ll have a much broader range of devices to choose from (a lot of IT companies wants in on the tablet cash cow).

The Android based Archos 7 tablet comes with either 2GB or 8GB of storage space capacity and will start shipping on the May 17 release date.