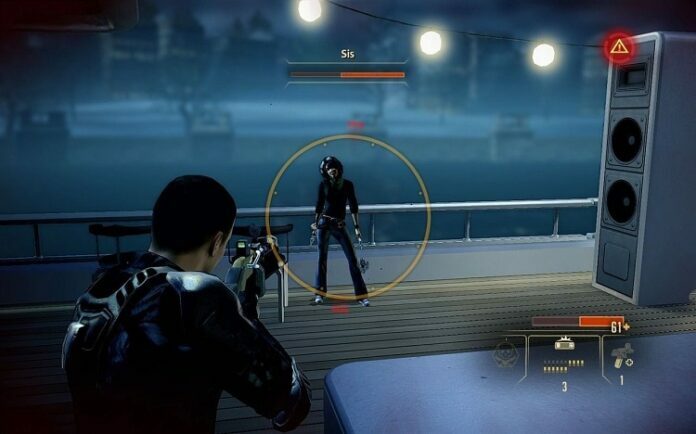 Obsidian’s first original IP, Alpha Protocol, was launched yesterday in US stores, a few days after the European release. Despite its long development cycle and the fact that the game was initially supposed to come out over half a year ago, Alpha Protocol still managed to capture the attention of gamers everywhere, especially of RPG fans. Why is that? one may ask (granted, an “unenlightened” one). Quite simply because every game that’s coming from a studio founded by the likes of Feargus Urquhart and Chris Avellone (of Black Isle fame) has the potential of being an RPG masterpiece.

Many of you have probably noticed how many radically different Alpha Protocol reviews are out there, both in terms of overall scores but also regarding the appreciated/criticized elements. If you take a closer look at these articles (online or written) you will observe that two trends exist: one that consists of bashing almost all the game’s components, and another one that appreciates the game as a blend that’s ultimately better than the sum of its parts. While both currents identify almost the same issues (mostly graphics and AI departments) the first review category finds these issues “game breaking”, while the latter views them only as some flaws that could have been avoided, but don’t damage the entire gaming experience.

The existence of the two very oposite trends didn’t initially intrigue me too much but, after putting the pieces together, I’ve realized that the “negative” one is emphasized almost exclusively within the US reviews, while the “positive” trend is made out almost entirely out of European Alpha Protocol reviews.

It’s very interesting to see how Alpha Protocol’s story, characters and dialog can be appreciated so totally different. While for Game Informer‘s Joe Jubba (US) it’s impossible to care for the “generic shady defense contractor out for profit” plot, Christian Dolan from Eurogamer (UK) really enjoyed the script with “plenty of classy moments, both in terms of the cut-scenes and the text“. The same Game Informer reviewer who sees Michael Thornton like an “unlikable idiot” and GameSpot‘s Kevin VanOrd (US), who appreciates Alpha Protocol’s story like soulless and lacking character, are totally contradicted by their Europeans colleagues, Matthew Handrahan (NowGamer – UK) and Henry Ernst (GamePro – Germany) who really seem to have taken a liking to both the game’s story and characters. Matthew Handrahan even says that “the characters are so well written that you’ll actually have an opinion on them. That’s so unusual for a videogame it’s actually depressing.” While the GamePro reviewer finds the missions varied and the dialog system excellent, Joystiq‘s Justin McElroy (US) finds Alpha Protocol to be boring and the dialog “uniformly insipid and lazily performed.”

Of course when it comes to a story, it’s a matter of tastes. Some people might like a certain script or an actor’s interpretation while others hate them. I am a big believer that “De gustibus non est disputandum”, but how come almost all the US reviewers found Alpha Protocol’s plot generic and its dialogue and characters idiotic and lifeless, while the majority of the European reviewers seemed to love these elements? Maybe a certain quote from Eurogamer’s Alpha Protocol Review can help us find an answer…”With a story that’s as deep or shallow as you want it to be…”.

However, these differences of opinion between the game reviewers from the Unites States and their counterparts from Europe do not end with Alpha Protocol’s story, characters or dialogue. While everyone in their right mind will criticize Obsidian and their game for the unfortunate implementation of the Unreal Engine 3, the bad A.I. or the “awkward” animation system (as they are sub-par by the current gaming industry standards), there are different opinions on how these elements affect the overall Alpha Protocol gameplay experience.

For the US gamers (I’m going out on a limb here, assuming that the US and EU reviewers are merely expressing the point of view of that specific gaming community to whom they [should] cater to), the low production values of Alpha Protocol (you know…small team spread over multiple projects, limited budget and the like) are probably going to be a major turnoff. At least that seems to be the case for Justin McElroy (Joystiq) who found Alpha Protocol “structurally flawed” and a “technical nightmare“. Joe Jubba was also unable to enjoy the game, or at least that’s the conclusion that I take from his “I never warmed up to Thornton or thought it was cool, and i got more entertainment watching his failure than i did his success” remark. Charles Onyett’s (IGN – US) closing words don’t stray from what we can now call the “US trend” – imbalanced skills, technical glitches, and bad AI “undercut the entertainment” in Charles’ opinion, “making Alpha Protocol a game you can safely pass by.”

On the other hand, the Eu gamers might look past those (undeniable) flaws in Alpha Protocol and actually enjoy the “overall” game experience. Rob Taylor (Games Master) even says that while “Alpha Protocol’s a technical turkey“, the game is also “gripping, innovative and deserving of both success and a sequel. It might look like a dog, but dig deep and you’re in for an undercover treat – it’s a stonking feeling when a game we were expecting to stink turns out to be a revelation.” And even though I’m sure they didn’t consult each other before writing their Alpha Protocol reviews, NowGamer’s Matthew Handrahan communicates the same thing as Rob, but with different words: “Some will never see past these problems, but for those that can, Alpha Protocol is that rarest of things: a videogame that doesn‘t pander to its audience with a technicolor world of goblins and space marines, but actually demands that you pay attention, listen, and even conduct research to get the most out of the experience.”

Many of the contrasting opinions about Alpha Protocol might have their roots in the fact that some reviewers (mainly from US) played AP like an action game with some RPG influences (aka Mass Effect) and others (this time read “EU reviewers”) played it like an old skool RPG in an action game clothing. Just read the following quotes and you’ll see what I’m talking about.

Justin McElroy, Joystiq: “Much like obvious influence Mass Effect, whether or not your weapon scores a hit is more dependent on its accuracy statistic than your actual skill. Even if you line up your shot perfectly you’ll often whiff, especially in the early hours of the game. Note to developers: I don’t care if it’s realistic, making me miss because of math is never, ever, ever fun. Now stop it.”

Rob Taylor, Games Master:”The shooting’s nowhere near as slick as that other Unreal Engine-powered RPG fave, Mass Effect 2, but it’s more gratifying and multifaceted.” “As Thorton levels up and develops his weapons specialties/perks, the initially frustrating: ‘I’m shooting this goon repeatedly in the face, but he’s not actually taking any damage’ routine fades to black and combat becomes very exciting indeed.”

If Alpha protocol’s story (everything from the script to the actors’ performances), technical glitches and “the way it’s meant to be played” are three major aspects of the game where the EU and US reviews contradict one another, there are also some other points where we can find some major discrepancies between these “continental” points of view.

For example, both Game Informer and IGN list under CONS the lasting appeal (or the game’s re-playability) while both the Spanish Official Playstation Magazine and 3DJuegos (also from Spain) explicitly state that this is one of Alpha Protocol’s strong points. What’s up with that? Who should we, as gamers, believe?

Fortunately there are certain affirmations made by supporters of both points of view (or trends, currents…however you want to call them) that are certainly true no matter how you look at Alpha Protocol or Obsidian. In my humble opinion every Alpha Protocol review out there should convey these ideas to its readers.

Kevin VanOrd is absolutely right when he says that Alpha Protocol’s technical glitches, bad A.I. and the half-baked cover system are unexplainable, especially considering that “most game developers seem to have worked through such basic obstacles years ago“. What’s up with that, Obsidian?

On the other hand I’ve noticed for a long time that many magazines/review sites tend to overlook some pretty noticeable problems that certain games coming from big-ass publishers and developers have, while the “not so hyped” games tend to be hammered for the same issues. Matthew Handrahan (Now Gamer) puts it better that i ever could – “When Mass Effect’s frame-rate slowed to a crawl did you grind your teeth in frustration, or simply wait for it to pass, safe in the knowledge that there was a compelling space opera waiting for you on the other side? When Bioshock 2’s textures chose to show up several minutes after the start of a level, did you brand the game a travesty, or just carry on regardless?”

I should probably mention that there are also cases when reviewers stray from these main tendencies of bashing or praising Alpha Protocol. This is the case with the 1UP Alpha Protocol review that gives the game a B+, appreciating it more than IGN, Gamespot and Game Informer combined – “Sega melds espionage action and role playing elements into a spy game that’s absolutely worth revisiting at least once after the credits roll.”

Of course there are European reviews that pretty much share the same point with their US cousins. Case in point: Videogamer‘s review, where Jamin Smith says that the time spent playing Alpha Protocol “has been frustrating as hell.”

Honestly i don’t remember the last time when the majority of reviewers from the two continents had such different opinions regarding a game. This situation inevitably brings up some “uncomfortable” questions: Are the European gamers more likely to get past the technical problems if a game’s story, its characters and the dialogue are worthwhile? Are graphics the most important aspect in a game, on the US market? Are US gamers shallow ? Are Europeans truly hardcore when it comes to gaming? Is there still a market for “classic” RPGs in US? Is the European gamer more geek-ier than its US friend or should we call the latter simply “casual”? And most importantly…is the US or EU gaming press representing the point of view of the majority of its readers?…Unfortunately you won’t find the answer to these questions here, or anywhere else on the web for that matter. Most likely the answer lies deep within each and everyone who has ever played a video game, from Pac-Man to Super Mario Galaxy and from Dune 2 to Supreme Commander.

As far as Alpha Protocol goes i should probably end this long article (thanks if you stuck till the end) by quoting, again, from NowGamer’s review : “If you want slick but ultimately hollow action you can always play Splinter Cell: Conviction. What Obsidian has accomplished with Alpha Protocol is so much more memorable than slow-motion death.” At least that’s how i currently feel…how about you?