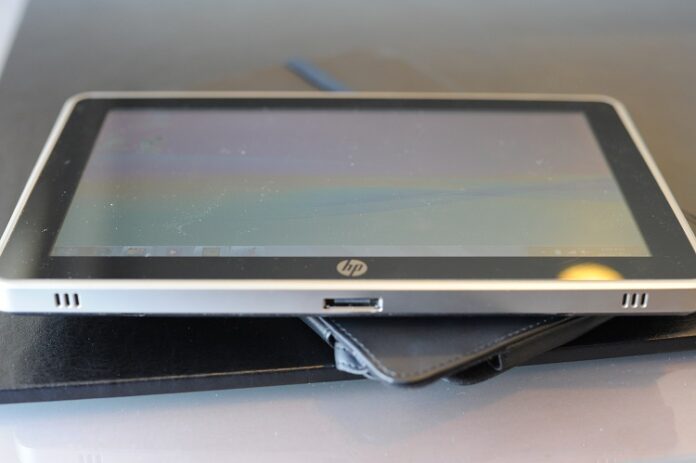 The HP Slate is finally official, so now you can actually say that all the rumors and leaks and the wait was not in vain. This Atom-powered, Windows 7 beautiful piece of technology will be available for anyone planing to get one for $799 on HP’s website.

Many might be a little bothered by this tablet’s price, but let’s talk about what you get for your money, and you can decide if it’s worth it or not. Alongside the dock and the case, the Slate will be equipped with pretty much all of the things that were leaked and rumoured over this past year. The „engine underneath the hood” is a 1.86 GHz Atom Z540 processor, 2 GB of RAM and a 64 GB SSD, with the Crystal HD accelerator from Broadcom, so it can handle a 1080p HD video. Also, if you prefer viewing the movie on your television in the comfort of your home, the dock has a HDMI output so it can be hooked up to it with ease. The N-Trig active digitizer, used for taking notes, combined with the 8.9-inch capacitive touchscreen, and the fact that it runs on Windows 7 Professional, definitely helps this tablet pop up from all the other ones we have been seeing these last couple of weeks. In addition to all this, the Slate also has 2 cameras: a front facing VGA cam, and a 3 megapixel cam on the back.

Thanks to it’s metal edges and it’s rubberized back, the Slate has quite a sturdy feel to it, and even if the 8.9-inch screen may be considered small in comparison with other tablets that recently appeared, with their 10-inch screen,this 1.5-pound gadget is considerably easier to handle. Located on the edges are headphones jacks, a USB port, a CTRL+ALT+DEL key that gets us out of most problems and a keyboard button. On the right side there is also a slide-out Windows license, which according to HP had to be included. The 1024X600 in combination with the capacitive screen offers a pretty decent Windows experience, and the N-Tryg stylus, is great for Paint and WordPad use, in spite of the fact it doesn’t have a slot of it’s on on the tablet.

Even though the active digitizer inflates the price of the HP Slate, it provides a great alternative for the soft keyboard which might be a little difficult to use for some of us. Because of the fact that it carries a lesser Atom Z series processor, amazing speed shouldn’t be expected from this device. Also, due to it’s new target for the business market, it doesn’t come equipped with any pre-installed software layer. For more info and a video, visit engadget.com