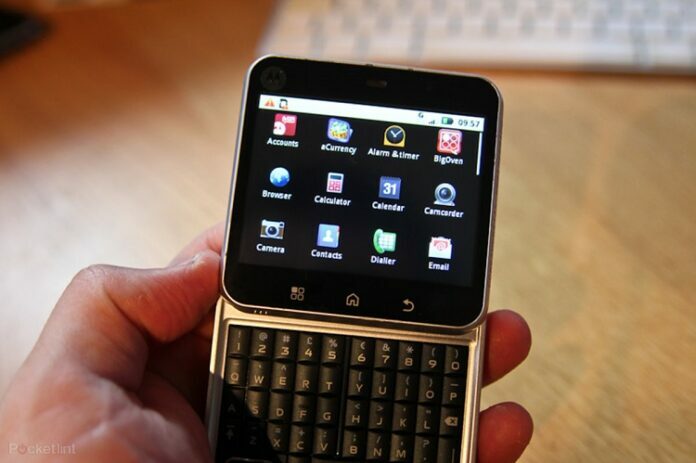 Motorola have always tried to be innovative and the new Motorola Flipout is no exception. Part of a long list of firsts, such as the first pager, the first walkie-talkie, the first mobile phone for commercial use and a lot of other products that revolutionized communication, the Flipout looks a lot like the already existing Nokia 7705 Twist. Although that technically doesn’t count as a first anymore, the new Flipout seems to be a better phone and a better gadget then its Nokia rival.

Nowadays, there’s a list of mandatory specs we expect from every newbie on the market. The new Motorola will make no exception, supporting WiFi, USB 2.0, 3.5mm headset jack, microSD cards, FM radio, GPS and even a digital compass. In addition to that, it will provide a 512MB internal memory, enough to save a couple of hundred pictures taken with its 3 megapixels camera. Another interesting fact is the battery standby time (as presented in the spec sheet) which should be somewhere around two weeks. The phone will run Android 2.1 OS and maybe fans will be able to upgrade their device to Android 2.2, just as with the Motorola Droid. Users will also be able to enjoy MotoBlur, a service that helps one keep in touch with friends over Facebook, Twitter, MySpace and other customizable social networking options.

All these might sound good as technical specs, but to be honest one thing’s for sure: the Motorola Flipout looks like a cool gadget, that will make people turn their heads, at least for a while. The touchscreen display and the QWERTY keyboard that rotates from underneath it provide both an interactive interface and a fully functional keyboard including a row for numeric keys that might come in handy sometimes. The device will be available in 8 different colours, including Rebel Pink and Fairway Green for those who really want a phone that stands out of the crowd.

Bearing in mind that despite its good looks and the numerous functions the Flipout is still a phone, Motorola announced the device will include CrystalTalkTM PLUS, which is supposed to improve the quality of the call by filtering out the background conversation. This function will also be implemented with help from a newly introduced secondary microphone. With Motorola’s great history in improvising and innovating, this might turn out to work really well.

The exact Motorola Flipout release date and price for the haven’t been announced yet. Still, it should come out around the second quarter of 2010 and comparing it with other already existing products that are similar with it in one way or another, we should expect a price around $350. All in all, it presents itself as a promising product, able to attract customers who like spin’em’around gadgets.