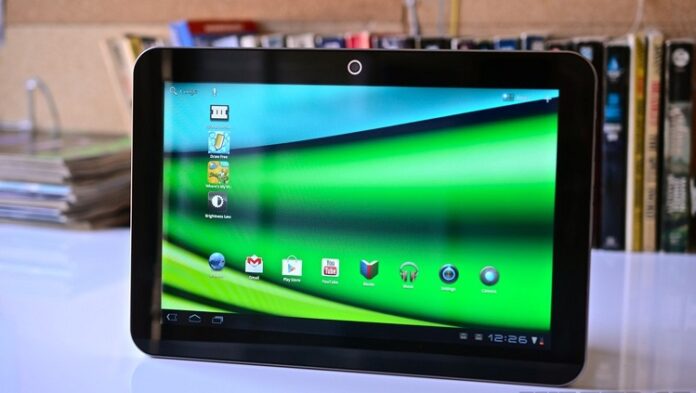 As many of you may already know, Toshiba intends to release a new tablet which will be running Honeycomb (release date: this spring). Toshiba decided to give it its own page. Now, maybe this will help some of you decide which tablet is suited for you, or maybe it will confuse you even more. Nevertheless, our job is to give you as much info about it as we can, so on we go.

This Honeycomb based tablet was running Froyo since back in January, but Toshiba’s plans were quite clear about the OS that will eventually land on their device. Even though they haven’t set a release date yet, I am sure you are dying to find out more about this new tablet, so I am about to tell you a little about its capabilities.

First of all, let’s talk about the screen, because, let’s face it, for many users it’s the most important part of the device. The 10.1-inch tablet will have a capacitive screen with a resolution of 1280 X 800, which should look quite amazing seeing how a 720p display looks very good even on a 15-inch display for example. The device will also be equipped with an accelerometer, a light sensor, and of course full-sized HDMI and USB ports, as well as a mini-USB port and SD slot. Of course, these have become some “standard” specs for a tablet. However, I think it’s pertinent to mention that the HDMI port for instance will not go to waste, seeing how the tablet has 1080p playback capabilities, so if you don’t think 10.1 inches and a 720p resolution can satisfy your media needs, you can always plug it into a full-HD TV. In addition, the tablet will have a 802.11n Wi-Fi connection, Bluetooth and built-in GPS, which can come in very handy if you are the kind of person who needs a tablet for the outdoors rather than the indoors.

Toshiba’s tab will also come with 2 digital cameras: a 5-megapixel camera on the back and a 2-megapixel camera on the front. I must say that the back facing camera, combined with the 720p display can turn the Tablet into one heck of a photo album. The Tablet will also have an on-screen keyboard which features haptic feedback. I’ve been rambling about all the cool little details and almost forgot to tell you what actually powers the tablet, and I must tell you I was quite impressed to find out that Toshiba chose the NVIDIA Tegra 2 Processor for their upcoming device.

The dimensions of the Toshiba tablet are 10.7 x 6.9 x .6 inches. I should also mention that it will have a rubberized backing (which can be swapped), and a replaceable battery.

This being said, you should really give this tablet your consideration, and hopefully finally decide on a tablet that suites you, if you haven’t already done so. Also, if you want you can check out the page that Toshiba has put up for the upcoming tablet, even though there is not too much new information there and it still remains nameless.