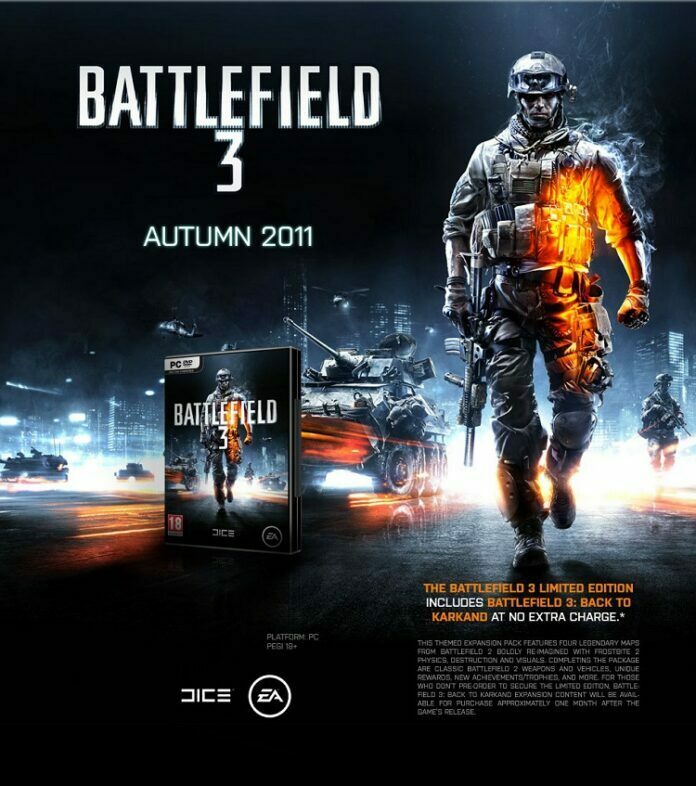 I’m not sure if you know about this, but last week, the Swedish team at DICE officially announced that the Battlefield 3 release date will “fall” sometime next Autumn. They also said something about a limited edition, and today we’re gonna talk a little about that. We might have some valuable info for you, courtesy of a leaked poster on EnterBF3.

Here’s the deal: the limited edition of Battlefield 3 (Back to Karkand) will come along with the Strike at Karkand environment (touted as the most popular BF online map, it will be remade in four environments for the LE), which will feature BF 2 content such as weapons and vehicles. That sounds great to those of you run down by Battlefield 2 nostalgia. It seems DICE took a peek at the multitude of BF forums and the fact that a lot of gamers wanted the Karkand map in BF 3.

We don’t know yet which are the four maps included in the DLC, as the poster (pictured below) doesn’t say anything about this. Although the poster only shows the PC version of the game, we can speculate, however, that the Battlefield 3 pack will be available for the PC and consoles alike: it seems that the limited edition will feature various trophies and achievements for gamers to unlock, so PlayStation 3 and Xbox 360 won’t be left out of the mix.

And the good news doesn’t end here. Those of you who won’t manage to buy the limited edition Battlefield 3 can purchase and download the Back to Karkand expansion a month after the release of the game. An exact release date or the price are still unknown, sadly.

Now remember, this poster was leaked on a BF 3 forum, and neither DICE nor EA have said anything about it. We’ll know the truth once DICE officially announces the limited edition at the Game Developers Conference 2011, held at the end of this month.

Mass Effect 2 PS3 Demo to be released next week