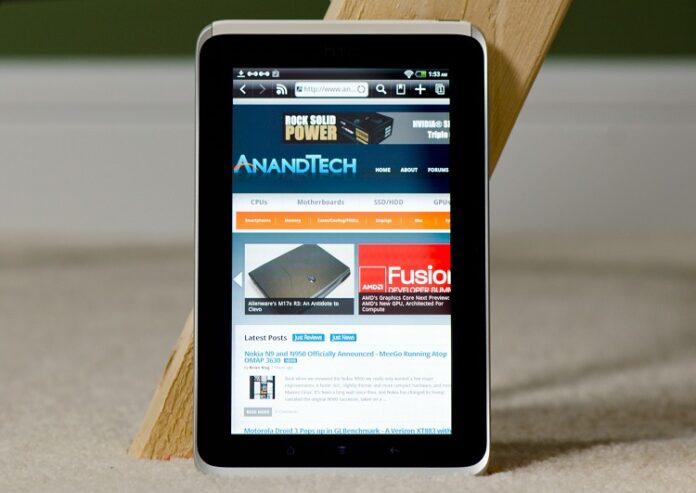 Although every one of us is pretty excited about the move towards 4G technology, and most of us still enjoy the 3G connectivity on our mobile devices, there are still a lot people that prefer their tablets in Wi-Fi only variants (thus not being tied up with a carrier). With this in mind, HTC and Best Buy just announced the exclusive launch of the WiFi-only model of the HTC Flyer, which is going to be released sometime during this Spring. The 7-inch Android tablet will be available at all Best Buy and Best Buy Mobile stores, as well as at BestBuy.com, as soon as the slate gets launched.

This announcement comes just after Samsung unveiled their own two new versions of the Galaxy Tab, the 8.9 and 10.1 models, both of them available in WiFi-only versions as well. We have known about the 3G version of the HTC Flyer ever since the Mobile World Congress took place last month, even though there was no info about possible carriers, pricing or release dates. This week at CTIA, Sprint came forward and announced the HTC EVO View 4G, their own version of the HTC Flyer, which is going to use Sprint’s 4G WiMAX network.

HTC’s first Android tablet will initially run on a heavily customized version of the Gingerbread OS, with the Android 3.0 Honeycomb update to be pushed at some point later on. The tablet is powered by the most powerful single-core Qulacomm Snapdragon processor clocked at 1.5 GHz and features HTC Sense 2.1, HTC Scribe, HTC Watch Service and HTC On-Live, which are some pretty interesting services that HTC has to offer. Looking forward to see how the first Android slate from HTC will manage to keep up with an already overcrowded tablet market.