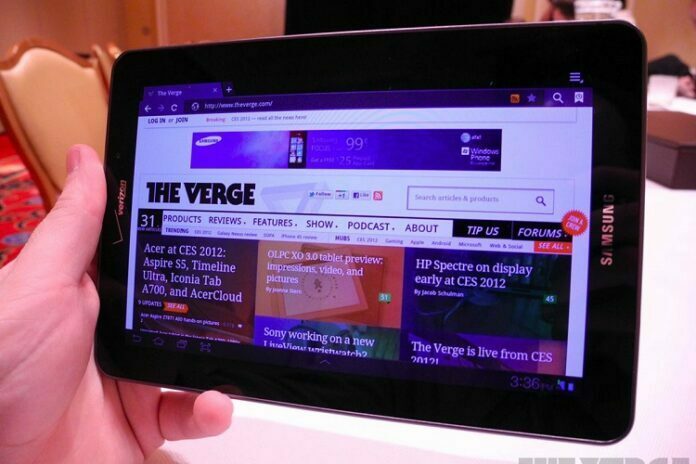 The hottest new displayed item from Samsung that seems to create a lot of fuss every time its name is heard is about to attempt to take a giant leap on the Android community. It looks like Samsung really wants to get on Apple’s nerves and create a real competition for the iPad. Wall Street Journal reports that the Samsung Galaxy tab will be carried in the U.S. by three of the four largest wireless operators in the country. That is Verizon Wireless, Sprint Nextel and AT&T, Samsung leaving out the fourth major carrier, T-Mobile. That is a bit odd since Samsung has been cutting deals for its most recent smartphone, the Galaxy, with all four major operators, including T-Mobile.

Wall Street Journal got their hands on these tips concerning Galaxy tab’s future in the U.S. from “three people familiar with the matter”. Another two persons close to the matter in question tipped WSJ that Samsung is scheduled to unveil the Galaxy tablet on American soil at Time Warner Center from New York City on September 16.

Although no price scheme was revealed yet, Wall Street Journal once again seemed to be able to find a familiar person related to the matter, but this time with an actual name. Samsung product executive Hankil Yoon stated in an interview that took place about a week ago that the Galaxy tab would most likely revolve around $2-300 (we kind of expected that actually) which is quite a reasonable price considering the tablet’s specs and the prices that AT&T and Apple introduced for the iPad, which range from $499 (for Wi-Fi only versions) to $829. Hankil Yoon informed that the final price will be influenced by the different carriers’ subsidies and he also seemed quite optimistic when revealing expectations to deliver 10 million units, reaching a third of the global tablet market next year.

Although we have already heard rumors regarding a deal between Sprint and Samsung concerning the Android based tablet that included 4G network speculations, nothing was quite certain until now. That’s not also the case with AT&T though. We actually got our hands on an incriminating picture placing the Galaxy tablet on AT&T grounds. Thanks to Engadget, our suspicions were confirmed, but not everybody is that excited about AT&T being Galaxy’s carrier if it goes with a new contract. There have also been some rumors wondering around regarding three more Android acquisitions AT&T is about to unveil, so keep your fingers crossed for something nice.