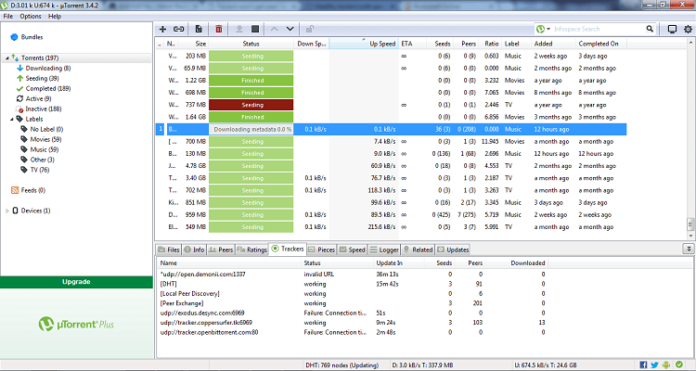 As of a few days ago, we have a brand new Bittorrent to play with. The brainheads that masterminded the creation of uTorrent are proud to present today the uTorrent 3.0 Alpha version.

For those who don’t know the uTorrent client is a tiny freeware released first time from the Bittorrent Inc. The main objective of utorrent is to be “greener” then others bittorent clients out there. So the lack of processing requirements made it top notch in the peer-to-peer industry, up to the point where uTorrent is the most popular bittorrent client out there.

So let’s get down to business. As I stated earlier uTorrent has reached its peak with the release of 3.0 in Alpha version. For those who aren’t interested in Alphas, Betas and all sort of release states mambo jambos, don’t panic because they have a very interesting release policy which includes the last stable version and the brand new prototype version, now the uTorrent 3.0 Alpha. So for the “take it easy” guys we have the stable version uTorrent 2.02.

But by now you ask yourself:” Why in the heck do they release the 3.0 when they almost made it to 2.02?” Well I have to say it’s a very good question. There was no concluding answer for this question. You can say that the majority of new features troubled the guys in sleep and made up their minds to release the 3.0, well there are no new major features, just some bugfixes and minor changes. A very good puzzle if you ask me.

For those who are curious the u in fact stands for μ, which is micro: one millionth and relates to how “green” the client is.

The uTorrent 3.0 Alpha is available for free download at the uTorrent forum and you can also check the release notes. Adios!